After installing MMP Stage 3 turbos on my BMW 135i, I needed an upgraded fuel system to get the most power out of the car. I was filling up with an E40 mix of 93 and E85 , but my HPFP couldn’t keep up and my old stage 1 inline LPFP was inadequate. I needed something that could handle straight E85 fuel and not run out of pressure at 700+whp.

Having good experiences with Robert at Precision Raceworks, I decided to go with his Stage 3+ Modular Fuel Pump Kit and opted for the upgraded fuel feed line and PNP harness. This would take care of my LPFP issues. I also purchased the PR/MMP Port Injection Kit at the same time to help my HPFP.

The products arrived quickly and were packaged nicely. I’ve always been satisfied with the quality from Precision Raceworks for the price. Upgraded fuel feed line not pictured. 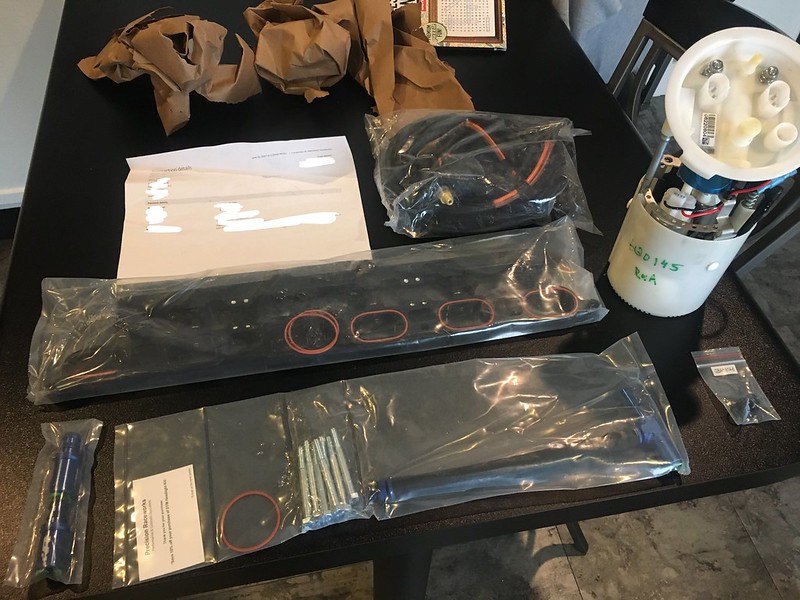 The first step was to install the upgraded Stage 3+ bucket that had two Walbro 450s stuffed inside. Robert was nice enough to assemble the fuel pumps in a core bucket for me to swap out. Usually you have to modify your stock bucket while mounting and wiring up the pump yourself. I jumped in the back seat and got to work. 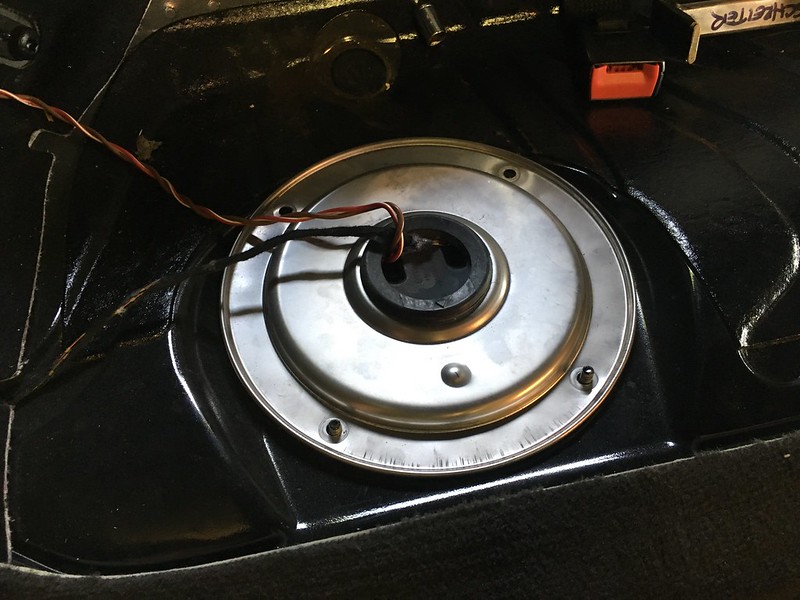 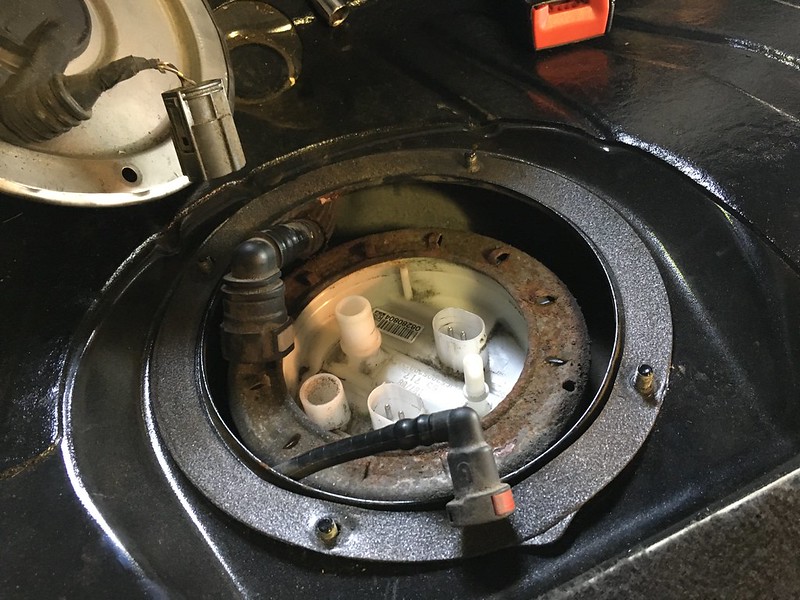 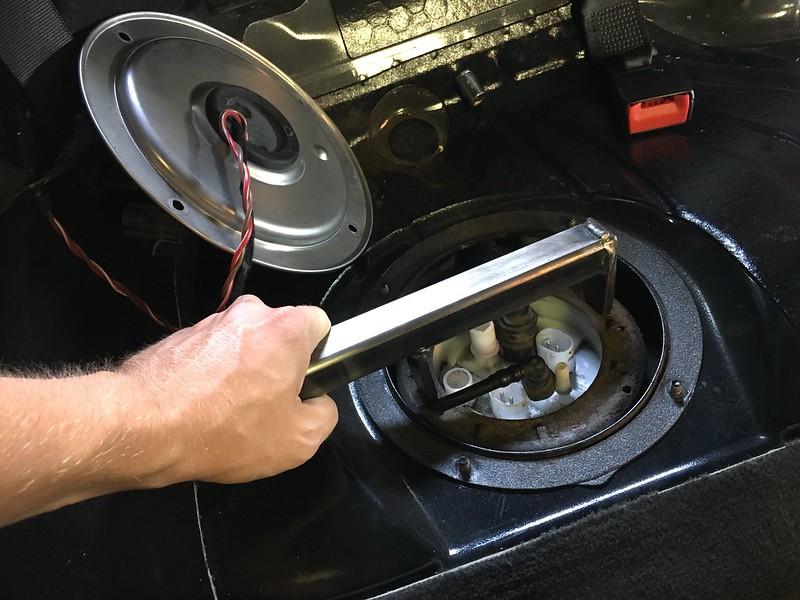 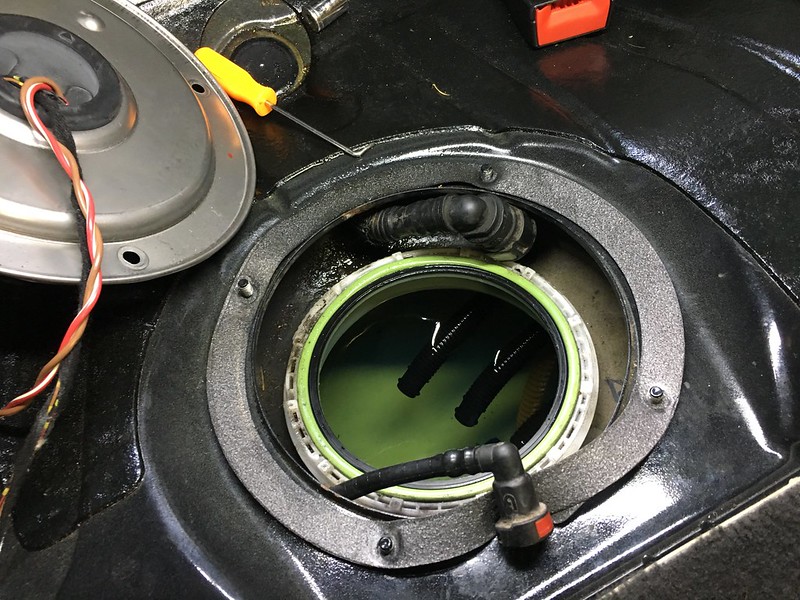 After fiddling around in the gas tank for a bit, I got the stock bucket out. New Precision Raceworks Stage 3+ bucket on the left, old OEM bucket on the right (with my old Stage 1 inline pump still attached). Note the additional terminals on the top of the new bucket for the secondary pump. 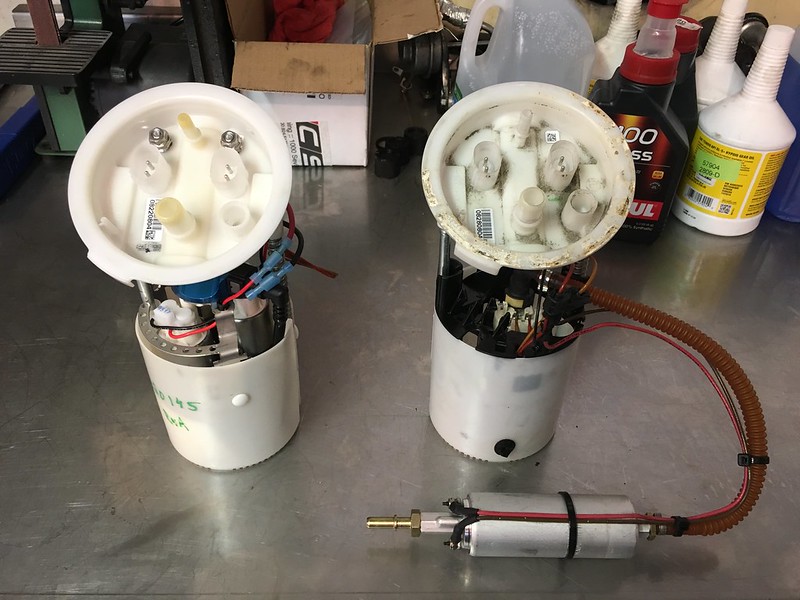 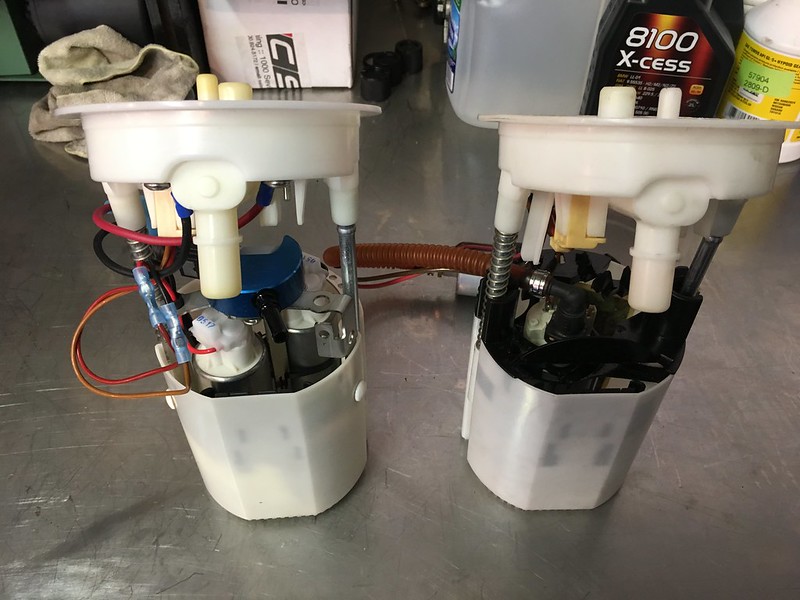 Installation was basically the reversal of disassembly. Fairly straightforward, more gas on the hands. A plug-and-play harness is included in the kit to activate the 2nd pump under boost. I routed it from the battery to the two terminals on the top of the bucket, then up under the hood to a Hobb’s switch (also included) that screws right into the meth port my charge pipe. The PNP harness is very nice quality and makes installation a breeze. The 2nd pump is set to kick on anytime the car sees more than 15PSI of boost. 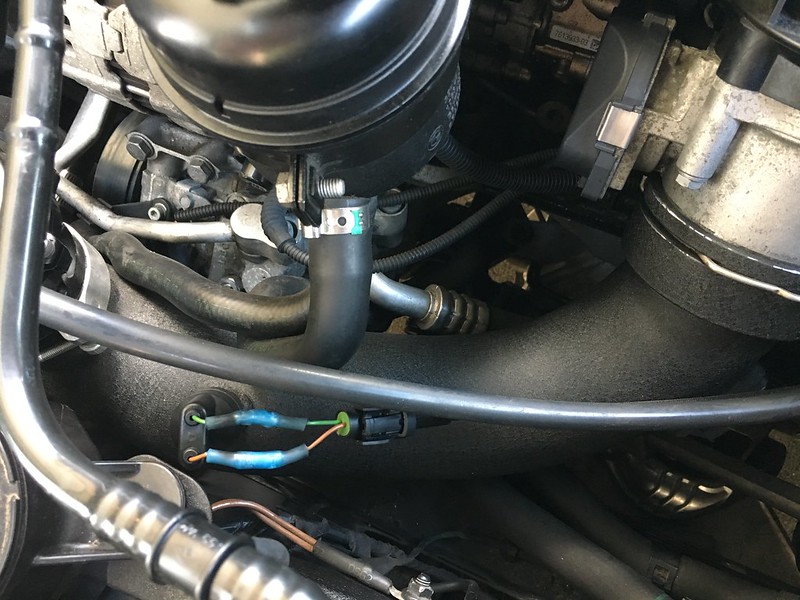 Next up was installing the port injection kit and upgraded fuel line. I reconnected the battery right before this to test that the LPFP bucket installation worked as it should (and it did). However, for those of you who are aren’t familiar with these cars, they run/prime the fuel pump every time a door opens after the car is “asleep”. Well, I disconnected the OEM fuel feed line and then opened the door so I could route the upgraded line to the tank. As soon as I opened the door, the pump kicked on and fuel sprayed everywhere out of the open port. I’d assume a gallon of gas was on the garage floor before I quickly plugged the OEM line back in. Whoops! 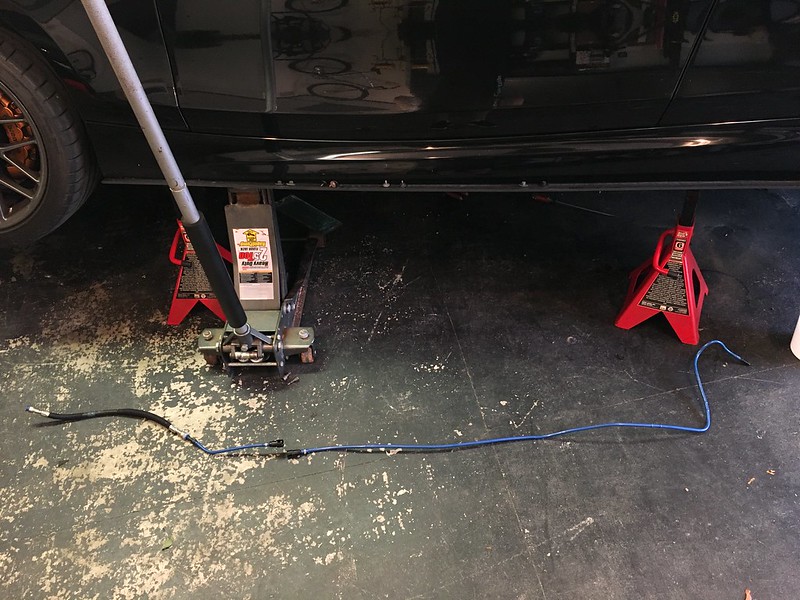 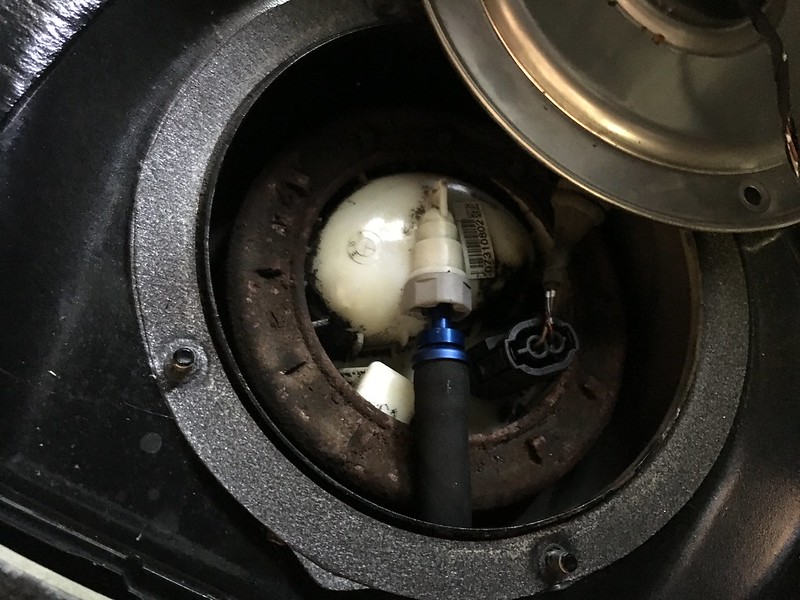 I ran the larger fuel feed line up to the front of the car and started removing parts so I could install the port injection kit. 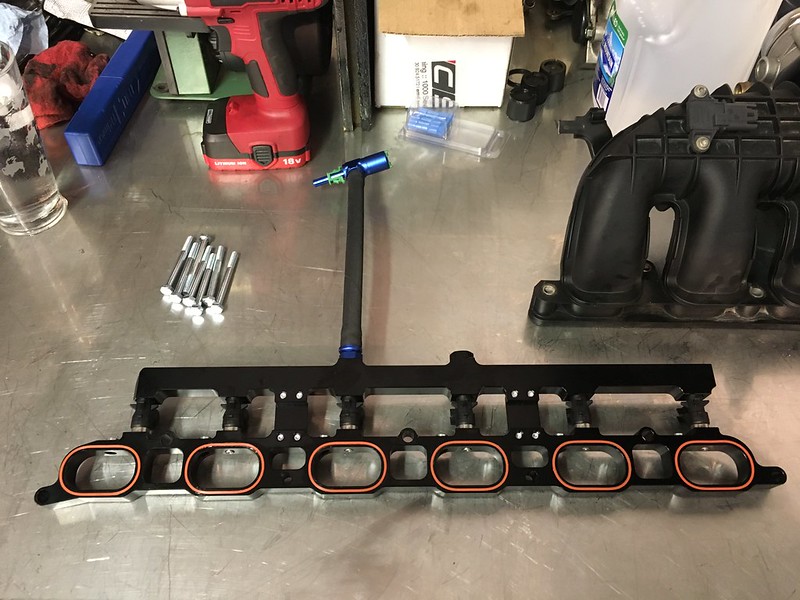 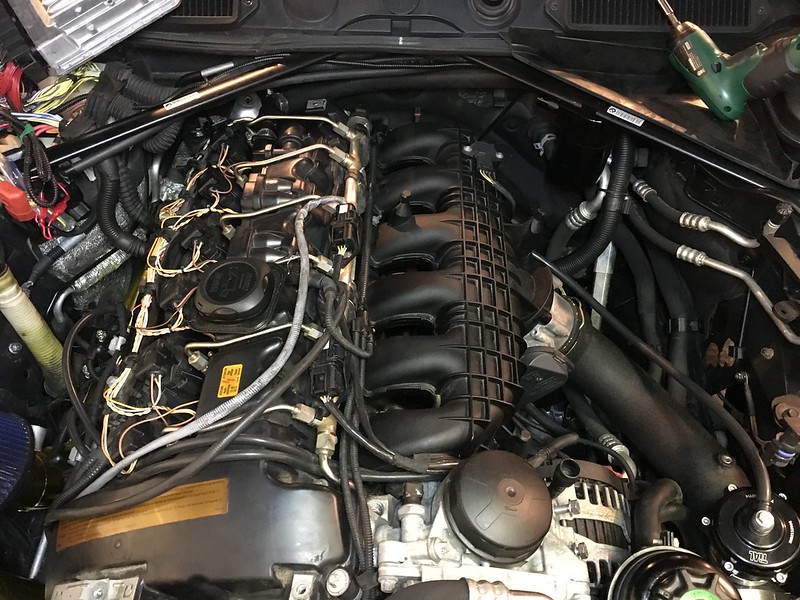 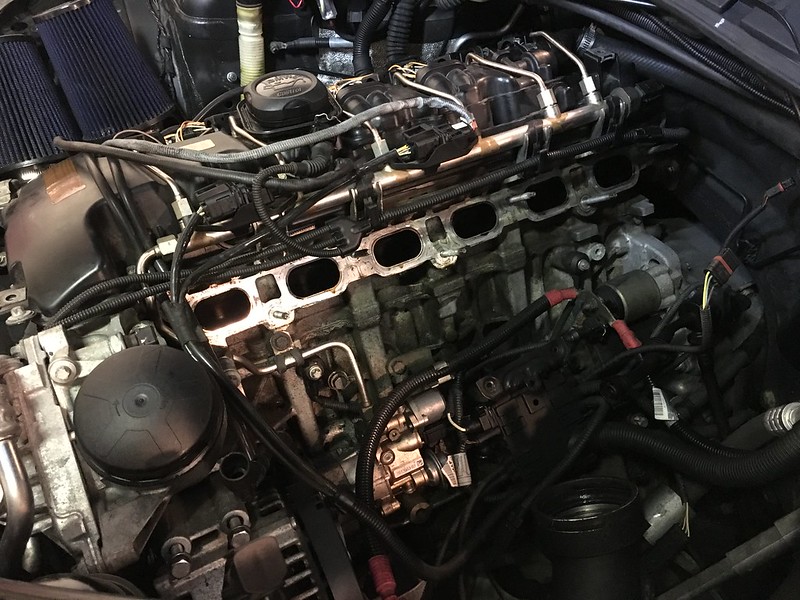 Intake manifold removed, port injection plate installed. I added a dab of gasket sealer to the o-rings just to make sure they stayed on. The manifold studs have to be replaced with longer bolts, but it’s best to leave two studs in, just hand tight. That way the port injection plate stayed aligned while I re-installed the intake manifold and tightened things down with five of the new longer bolts. Then remove the two studs and insert the two remaining bolts. 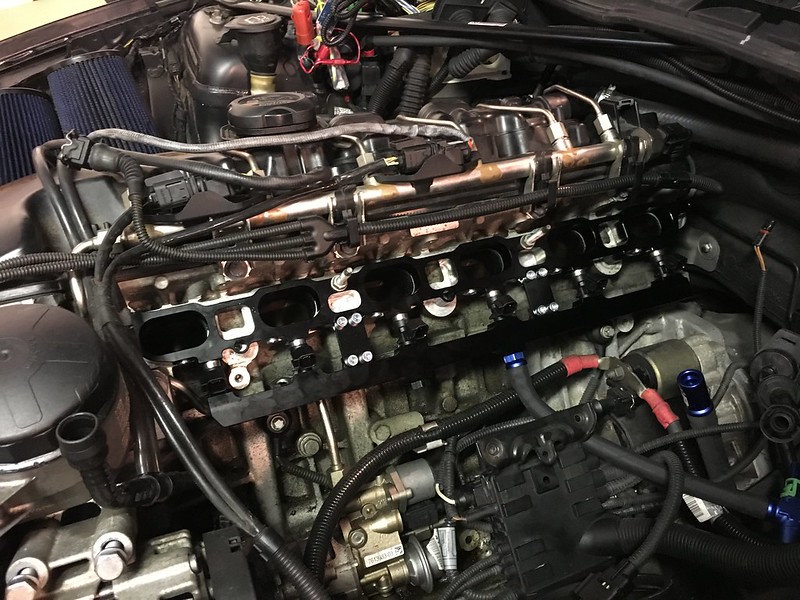 I connected the upgraded fuel line to the HPFP and port injection plate with the included T adapter. Then I plugged all of the injectors into the BMS port injection controller that I purchased ala-carte since I am using JB4. It took less than an hour to wire up the controller to my JB4 using the instructions at the top of this post. I forgot to take a picture of this, but I managed to fit everything in the DME box for a stealthy installation. Everything went back together smoothly and you can’t even tell the port injection is in there unless you look for it. 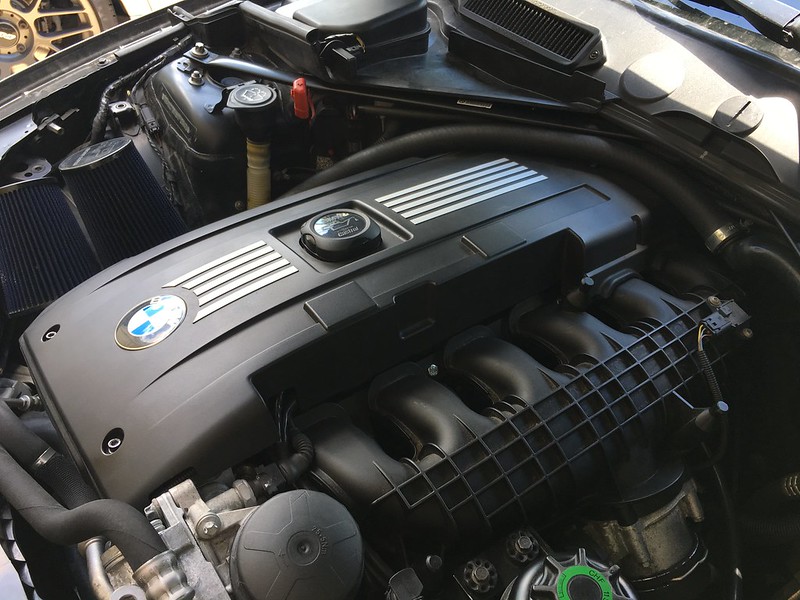 After everything was back together, I connected the battery so I could test that the port injection worked. As soon as I did, the fuel pumps primed and I heard fuel spraying under the car. Not just a small leak, it was dumping fuel – another gallon or two on the floor. I quickly disconnected the battery and investigated.

Well, I forgot to plug this port on the plate! The kit comes with a proper plug and o-ring… make sure to use it. Another whoops! 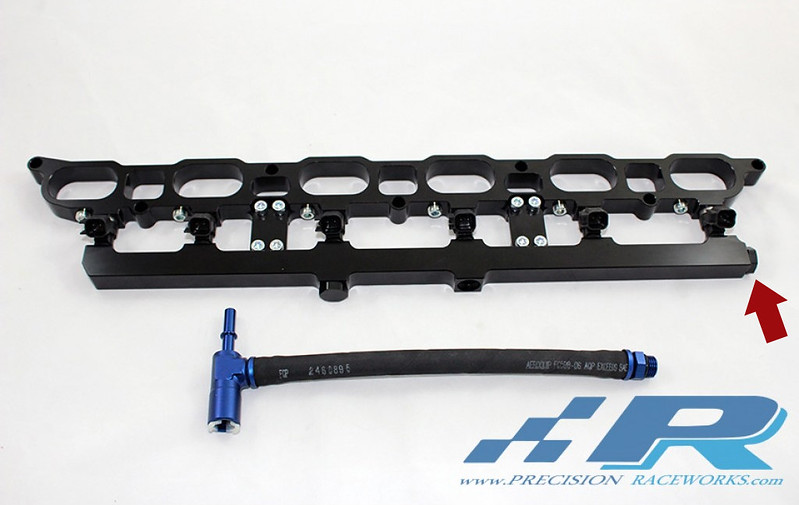 I screwed in the plug and wrapped things up, then went out for my first full tank of pure E85. No more mixing! 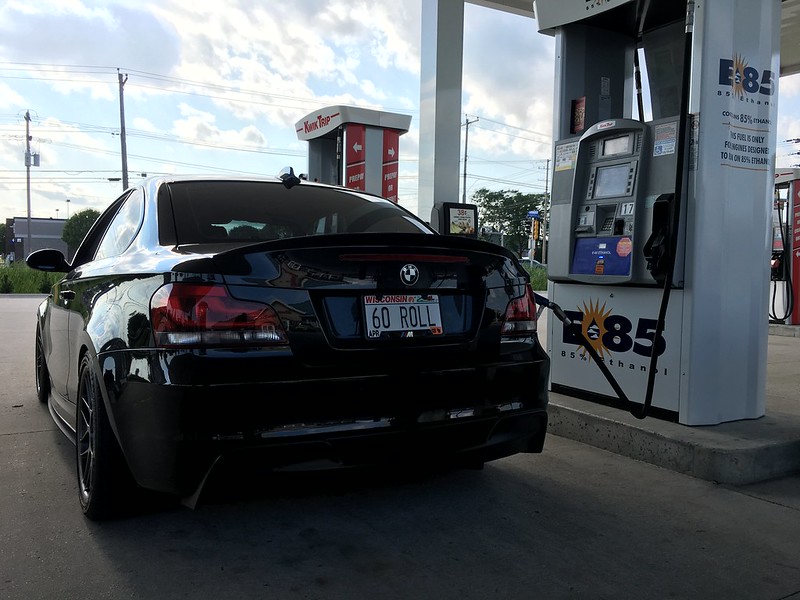 The car runs great and pulls strong on 28PSI. I’m thrilled! Shoutout to Robert at Precision Raceworks. This installation isn’t that hard but he promptly answered any questions I had. Not to mention the awesome pricing and quality of these products. I plan on getting his Precison Raceworks Ignition System Upgrade to go with this fuel system as well.